The difference between 2.4GHz and 5GHz

Almost all Wi-Fi devices on the market now support 2.4 GHz, and better devices can support both, namely 2.4 GHz and 5 GHz. Such broadband routers are called dual-band wireless routers.

Let’s talk about 2.4GHz and 5GHz in the Wi-Fi network below.

WiFi wireless is just abbreviation. They are actually a subset of the 802.11 wireless local area network standard. Since its birth in 1997, more than 35 versions of different sizes have been developed. Among them, 802.11a/b/g/n/ac has been developed six more mature versions.

IEEE 802.11a is a revised standard of the original 802.11 standard and was approved in 1999. The 802.11a standard uses the same core protocol as the original standard. The operating frequency is 5GHz, 52 orthogonal frequency division multiplexing subcarriers are used, and the maximum raw data transmission rate is 54Mb/s, which achieves the medium throughput of the actual network. (20Mb/s) requirements.

Due to the increasingly crowded 2.4G frequency band, the use of 5G frequency band is an important improvement of 802.11a. However, it also brings problems. The transmission distance is not as good as 802.11b/g; in theory, 5G signals are easier to be blocked and absorbed by walls, so the coverage of 802.11a is not as good as 801.11b. 802.11a can also be interfered, but because there are not many interference signals nearby, 802.11a usually has better throughput.

IEEE 802.11b is a standard for wireless local area networks. The carrier frequency is 2.4GHz, which can provide multiple transmission speeds of 1, 2, 5.5 and 11Mbit/s. It is sometimes incorrectly labeled as Wi-Fi. In fact, Wi-Fi is a trademark of the Wi-Fi Alliance. This trademark only guarantees that goods using the trademark can cooperate with each other, and has nothing to do with the standard itself. In the 2.4-GHz ISM frequency band, there are a total of 11 channels with a bandwidth of 22MHz, which are 11 overlapping frequency bands. The successor to IEEE 802.11b is IEEE 802.11g.

Later, some wireless router manufacturers developed new standards based on the IEEE 802.11g standard in response to market needs, and increased the theoretical transmission speed to 108Mbit/s or 125Mbit/s.

IEEE 802.11n is a standard developed on the basis of 802.11-2007 by a new working group formed by IEEE in January 2004 and was formally approved in September 2009. The standard adds support for MIMO, allowing a wireless bandwidth of 40MHz, and the theoretical maximum transmission speed is 600Mbit/s. At the same time, by using the space-time block code proposed by Alamouti, the standard expands the range of data transmission.

It adopts and expands the air interface concept derived from 802.11n, including: wider RF bandwidth (up to 160 MHz), more MIMO spatial streams (increased to 8), MU-MIMO , And high-density demodulation (modulation, up to 256QAM). It is a potential successor to IEEE 802.11n.

In 2017, Broadcom took the lead in launching the 802.11ax wireless chip. Because the previous 802.11ad was mainly in the 60GHZ frequency band, although the transmission speed was increased, its coverage was limited, and it became a functional technology that assisted 802.11ac. According to the official IEEE project, the sixth-generation Wi-Fi that inherits 802.11ac is 802.11ax, and a supporting sharing device has been launched since 2018.

The difference between 2.4GHz and 5GHz 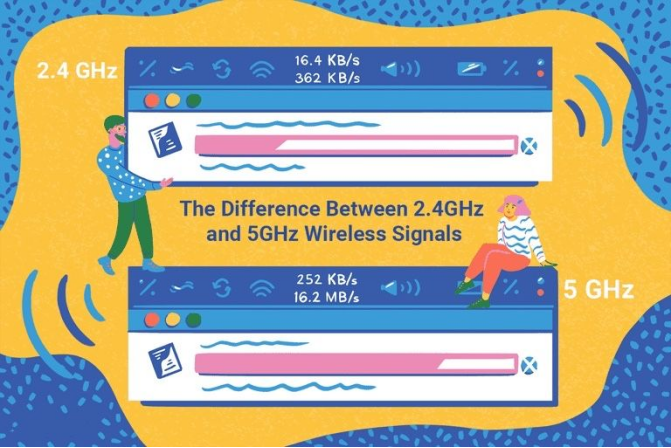 The first generation of wireless transmission standard IEEE 802.11 was born in 1997, so many electronic devices generally use 2.4GHz wireless frequency, such as microwave ovens, Bluetooth devices, etc., they will more or less interfere with 2.4GHz Wi-FI, so The signal is affected to a certain extent, just like a road with horse-drawn carriages, bicycles and cars running at the same time, and the running speed of the cars is naturally affected.

The 5GHz WiFi uses a higher frequency band to bring less channel congestion. It uses 22 channels and does not interfere with each other. Compared with the 3 channels of 2.4GHz, it significantly reduces signal congestion. So the transmission rate of 5GHz is 5GHz faster than 2.4GHz.

However, 5GHz Wi-Fi also has shortcomings. Its shortcomings lie in the transmission distance and the ability to traverse obstacles.

Because Wi-Fi is an electromagnetic wave, its main propagation method is straight line propagation. When it encounters obstacles, it will produce penetration, reflection, diffraction and other phenomena. Among them, penetration is the main one, and a small part of the signal will occur. Reflection and diffraction. The physical characteristics of radio waves are that the lower the frequency, the longer the wavelength, the smaller the loss during propagation, the wider the coverage, and the easier it is to bypass obstacles; the higher the frequency, the smaller the coverage and the more difficult it is. Go around obstacles.

Therefore, the 5G signal with high frequency and short wavelength has a relatively small coverage area, and the ability to pass through obstacles is not as good as 2.4GHz.

The figure below shows a comparison of Ekahau Site Survey’s coverage between the 2.4 GHz and 5 GHz frequency bands for the virtual designer. The darkest green of the two simulations represents a speed of 150 Mbps. The red in the 2.4 GHz simulation indicates a speed of 1 Mbps, and the red in 5 GHz indicates a speed of 6 Mbps. As you can see, the coverage of 2.4 GHz APs is indeed slightly larger, but the speeds at the edges of the 5 GHz coverage are faster. 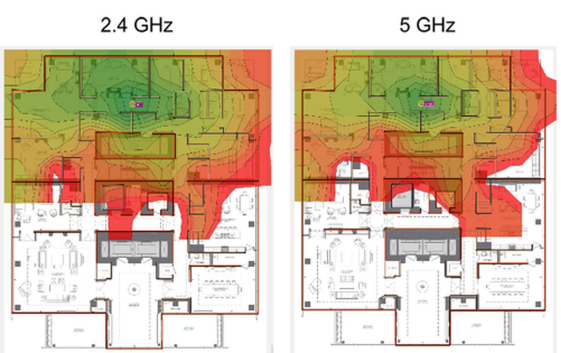 5 GHz and 2.4 GHz are different frequencies, each of which has advantages for Wi-Fi networks, and these advantages may depend on how you arrange the network-especially when considering the range and obstacles (walls, etc.) that the signal may need to cover Is it too much?

If you need to cover a larger area or have higher penetration into walls, 2.4 GHz will be better. However, without these limitations, 5 GHz is a faster option. When we combine the advantages and disadvantages of these two frequency bands and combine them into one, by using dual-band access points in wireless deployment, we can double the wireless bandwidth, reduce the impact of interference, and enjoy all-round A better Wi-Fi network.